Will I Have to Destroy Another Printer?

Shôn Ellerton, September 19, 2019
I think I have disposed of or destroyed at least ten printers in my life! Imagine all the printers we throw away because we cannot afford the spare parts and consumables to keep them going.

Let me tell you about my pet hate. When technology goes bad!

But that’s not new is it? Not entirely original is it? I do not know anybody who has not been extremely frustrated with technology at some point of another.

Today, for me, it is about printers.

I am extremely frustrated with printers!

The day my inkjet printer met its maker

Several years ago, my wife and I ambled into an Officeworks, an Australian superstore selling all sorts of goodies designed to break just after their warranties have expired including laptops, tablets, cameras, stationery, desks, chairs and of course, printers. Well, perhaps, the stationery won’t break but everything else will, guaranteed!

What we needed was one of those do-it-all printer/copier/scanner combos. We found one made by HP, an HP Photosmart Premium (oooh!) C309a colour inkjet printer. We were told that it would do a reasonable job at printing photographs. It even boasted fax facilities as well, which we never used. After all, who sends faxes anymore?  It wasn’t too expensive at around $250, so we bought it. It included the ink, but we had to buy special paper for the photograph printing which, as it turned out, costed more than getting the photographs printed out professionally if you take the cost of the ink into consideration as well.

For the next month or so, it worked reasonably well. We did not use it extensively; perhaps a ream or less of paper and a couple of dozen photographs. It then started to complain that it ran out of ink so I grabbed a set of official HP ink cartridges which nearly cost a quarter of the whole machine. For the next several months, we ended up having to replace ink five more times. We even tried substitutes which alleged to give longer printing lives but somehow, or another, it never came near to the amount it was supposed to print. Less than a year down the line, the maintenance of the printer costed far more than the initial cost of the printer.

After the first year, the printer never seemed to be giving the same high-quality results as it first did. Photograph quality was nowhere near to what it was when we first bought it; at which point, we decided to forego photograph printing once and for all. Who needs printed photos anyway?

We still used the printer but ended up using the black-and-white most of the time with virtually no use of the colour cartridges. It still chewed up the ink indiscriminately though!

Another irksome thing the printer was beginning to do was to beep incessantly that it could not be used because it was, apparently, offline. I assure you, it was not. It was connected and switched on and connected via a USB cable to the computer. After switching the printer off and on and resetting it, the printer worked for a time, but the problem was becoming more frequent. It also started to jam more and more to the point where, one day it completely failed to print.

During all this time, the scanner always worked, except now that the printer has failed to print, it decided to deprive me of using the scanner as well. After shouting at an inanimate object,

‘You bastard! I know you can’t print anymore, but for Christ’s sake, can’t I, at least, scan this document??!’

Knowing full well that hitting the button repetitively was not going to make one jot of difference, I relaxed, sauntered over to the backdoor overlooking the verandah, opened it slowly to full width. Then I calmly, unplugged the printer, gently lifted it up, walked to the verandah which was laid with concrete pavers. I walked with the solemnity of a funeral bearer. I then lobbed it making a perfect trajectory to the other side of the verandah.

Now if you’ve ever seen a brandy balloon glass explode as it hits face down on a kitchen floor, this is exactly what happened with this printer. It blew up like an IRA nail bomb sending shards of what seemed to be millions of very small pieces flying everywhere. Weeks later, I was finding peculiar small coily metally things scattered on the lawn. To this day, an odd piece unearths itself out of the adjoining flowering beds from time-to-time like an archaeological find.

If anybody had seen the 1999 movie, Office Space, and enjoyed the scene when a rogue printer was being demolished by a group of frustrated IT employees armed with baseball bats, I can tell you that my experience was decidedly more entertaining.

Feeling better for myself, I decided to look for an improvement. A laser jet colour printer! 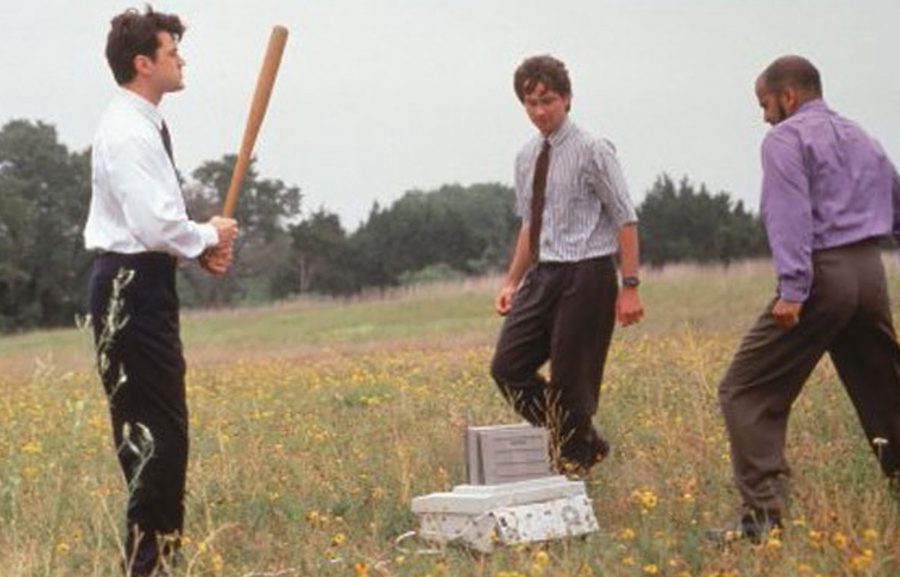 I did a little research online and discovered that I could be the proud owner of a colour laser jet printer which was built to last. In this case, it is the Fuji Xerox CM305DF printer. This monster of a printer weighs in at 30kg clearly built to last. Moreover, it is network-enabled, can print on practically any gauge of paper including card, has an array of impressive scanning options and can spit out printed material in a matter of seconds. Moreover, one could buy third-party ink toner cartridges for a fraction of the price of the official ones made by the manufacturer. This last point really sold it for me. The printer was a bargain at $400, again from Officeworks. Seriously, that is a lot of printer. The printer as boxed would not fit in my car so I had to go back home to fetch the trailer!

Apart from the occasional paper-jam and the episode where I was locked out of the user interface because I forgot my password, the printer has been reasonably faithful. It is now four years old and having bought the occasional set of third-party ink toners, the running costs have been very low.

Recently, I’ve noticed that the print quality is getting significantly worse with unwanted ghosting and ink blotches. It was only after researching what could be causing the problem, did I realise that my knowledge of laser jet printers was appallingly ignorant. Unbeknown to me was that ink toners are not the only consumables laser jet printers need besides paper. They also require two other essential consumables: fusers and drum cartridges. With dismay, I looked up the cost of replacing these items only to find that, in purchasing them, I would exceed the cost of getting a brand-new printer, and by quite a large margin at that.

What a colleague of mine at work told me to do

Here I am, stuck with an inordinately sized heavyweight behemoth of a printer which requires replacement parts far exceeding the cost of throwing it away and getting a brand-new one. I remember a conversation I had with a colleague at work just before buying the printer.

His strategy is this.

Buy a printer with a two-year warranty. Just before the warranty ends, box it up, return it to the shop and state that it isn’t printing properly anymore. The shop will, invariably, not bother to set it up to try to reproduce the problem, especially a large heavy printer which requires setup of a network connection. The shop will then send the printer back to the manufacturer. The manufacturer doesn’t bother trying to fix it; therefore, replaces with a new one along with another two-year warranty.

Morally wrong? I’m not so sure anymore.

What do they do with all the old printers?

I’ve stated in other articles that items built using complicated technology is apt to break. It’s in its ‘DNA’ so to speak, a natural tendency to break down into its elemental parts.

I try to keep electronics and devices as long as I usefully can; however, this is not always possible particularly with mobile phones that require to be changed due to either hardware that cannot be updated rendering the latest software unusable, connectors and batteries that cannot be fixed or a new transmission technology released in the mobile network not supported by the device.

The amount of thrown-away electronics in our society must be staggering. The concept of simply throwing away a 30kg printer just seems utterly wrong. What will happen to it? One of the ways we can dispose of such items, at least where I live, is to take them to one of our local department stores who have recycling facilities. However, much of it is still thrown away into landfill sites due to lack of resources to dispose of them properly or items which, simply, cannot be re-used.

If anything, what my colleague did by returning the printers to the manufacturers before the warranty expires is probably the most environmentally sound way of re-using the items considering that the manufacturers will have the best facilities of re-using any of the parts. Is this morally wrong? I think it’s now becoming standard practice with smart consumers, and manufacturers are geared up with making the best of the situation.

And a message to printer manufacturers…

Perhaps manufacturers should be encouraged to sell spare parts and consumables at reasonable prices instead of having society punishing the consumer for throwing away all the crap we cannot afford to maintain anymore! 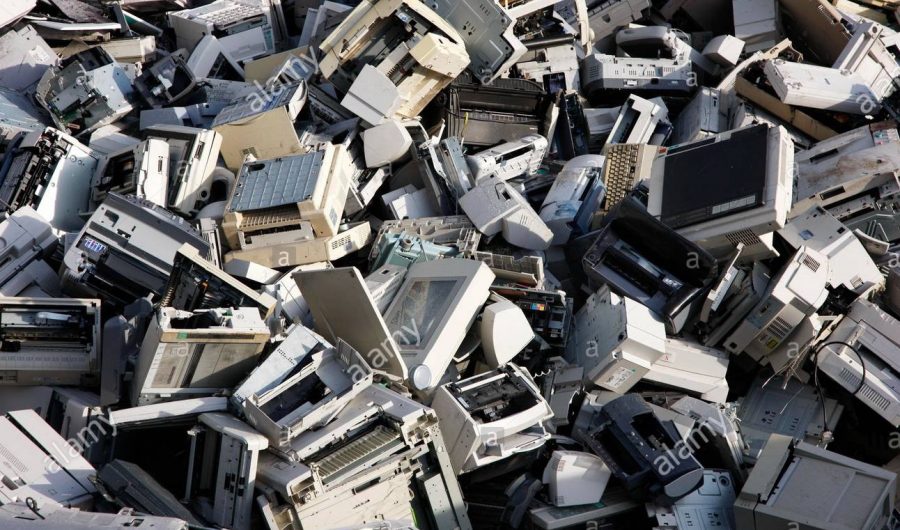