You Too Can Discourage Petrol Price Gouging

Shôn Ellerton, May 10, 2019
Anyone driving a petrol-engined car in Australia will be familiar with massive fluctuating petrol price differences. Many of us simply grumble that the petrol retailers are colluding with each other to rip us off. Instead, what can you do about it?

Petrol prices go up and down on a frequent basis within most countries of the world; however, the magnitude of the price changes in Australia is quite staggering. I have, on many occasions, driven down a stretch of road in Adelaide passing a service station selling petrol at nearly 40% higher than another station down the road only a few hundred metres away. On one occasion, I remember passing a station selling petrol at $1.55 per litre and only a couple of blocks away was another selling at $1.05. And what’s so interesting about this is that the station selling at nearly 50% higher still had customers filling up their cars with petrol after passing the cheaper one. I once had the urge to stop by and ask them why but didn’t. I could only think of a few reasons why. Maybe they didn’t see the other station. Perhaps the cheaper one did not offer corporate fuel card facilities. Maybe the fuel at the more expensive one was better (unlikely). Or perhaps they simply didn’t care and were too lazy to turn around and backtrack.

The ACCC (Australian Competition & Consumer Commission) has a useful webpage (link below) known to many motorists showing the current petrol price cycles.

Much like the stock market, motorists use this information to obtain a fairly clear idea when the price of petrol is going to go up or down. Note the difference in the number of days between price cycles from city to city!

If you are not familiar with this webpage, it is certainly worth reading and bookmarking. For example, using the chart for Melbourne below, it is highly likely that the prices will start to drop soon from its high point. Remember that prices pump much harder than when they drop! One can draw a trend line from the nadir (low) points in the chart to approximate when this will happen. 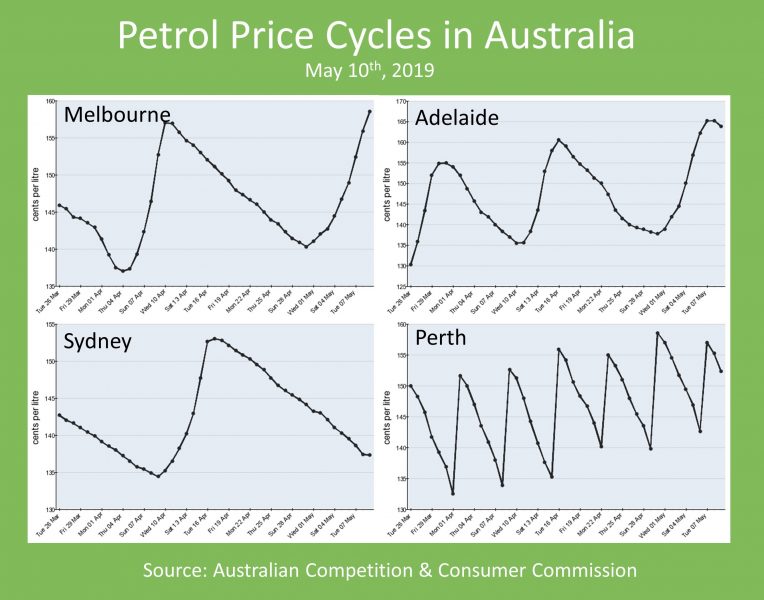 The ACCC claims that price cycles are the result of deliberate pricing policies of petrol retailers and not directly related to wholesale costs. Yes, I agree this is true to some extent, although the tone of the statement is quite negative in nature. The reality is that all products, whether they are jelly babies or teabags, are sold with deliberate pricing in place. Moreover, the pricing of petrol is often set using algorithms to determine the largest possible catchment of sales in a given time and a given place. Many variables plugged into these algorithms including the number of competitors, proximity of competitors, time of the week, wholesale prices, distribution costs, and many more. Each of the larger competitors will be working off similarly algorithms which, in turn, leads to these very interesting price cycles. Looking at the petrol cycles, one could think of Elliot waves in a stock market.

To what may seem to be downright collusion could simply be the result of capturing the most sales using predefined algorithms. In the case of large petrol retailers, the choice of whether to lower or raise the price of petrol is not at the discretion of the service station managers. Many industries use this tactic including, for example, the airline industry. With competition in mind, prices are set by any industry to maximise revenue.

Thankfully, there is competition in the petrol retailer space. Many smaller more enterprising independent petrol retailers buck the usual pattern of the petrol cycles enticing motorists with far lower prices than other mainstream outlets when the price cycle is at a high.

What Can You Do as a Consumer?

Don’t Fill Up Your Car When the Price is High

Unless you cannot avoid it, don’t fill up your car when the price is at a high. This is not always possible though. The best one can do is plan ahead and take the opportunity to fill up when prices are cheap.

If You Have More Than One Car

Those with more than one car could optimise buying fuel at lower prices simply by the fact that you might be able to ‘make it’ to the next low price point in the cycle before filling up the cars.

I’ve seen it a few times. Motorists heaving out their petrol containers out from the backs of their cars to be all filled up when prices are low. I’m not advocating that one should store vast amounts of petrol due to safety reasons, but it is an option.

Use an App to Check Out Which Prices Are Cheaper

There are a number of apps available for your smartphone including PetrolSpy and Motormouth. Even during times of high petrol prices, I can usually find petrol stations with far lower prices in the area that I am in. This is where one can make the biggest difference to the overall price market. Simple supply and demand. If everyone used the app to find the cheaper outlet and if nobody used the outlets with higher prices, this data will be fed into the pricing algorithms which, in turn, will compensate to ensure that they remain competitive. Economics 101. 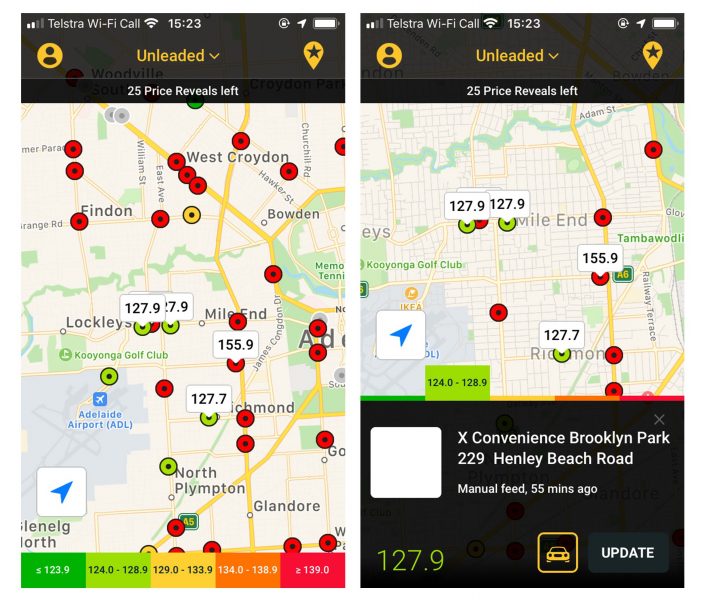 For Those with Corporate Fuel Cards

One may not have a choice with some independents should a corporate fuel card be used. This happened to me some years ago when I was given a Shell fuel card. More often than not, the Shell prices were higher than those of the nearby independents. Perhaps, this is one of the reasons why our local Shell station consistently has higher prices than the other competitors nearby. If you do have a choice of outlets to use and you are not paying for the fuel personally, do the right thing and find the best price for your fuel regardless.

There are many articles and posts about petrol price gouging, of which, most tend to be focussed on demonising how petrol retailers are colluding with each other to rip off customers and what measures should be put in place on stopping them from doing so. Selling petrol like anything else is dictated by supply and demand. Believe you me, if everyone actively hunted for cheaper petrol using online apps or took measures to plan their fuel use around the petrol price cycles, the algorithms used by the retailers to set price points will most assuredly be modified. No retailer wants long periods of time with few or no customers. Unfortunately, there is a very large segment of the petrol-buying community that do not plan as such and because of this, retailers have enough consumers buying at high price points to maintain their current price models.